You are here: Home › HEDLines - Archive › Demographics are destiny

From time to time we mention the startling increase in world population, as it should be in the back of every market person's mind, especially when considering commodities. In the December 6th edition we wrote about the roughly equal rates of growth of crop production and population, which is keeping things in an approximate balance. Crop production is currently slightly ahead of population, so inventories have risen and prices are quite stable, although they are higher than twenty years ago. Perhaps the 1.1% annual rate of population growth can be best imagined by comparing the annual addition of 83 million extra people with different-sized countries. That equates to a new Germany, Iran or Turkey every year, a new United States in less than 4 years and a new Denmark or Singapore every three and a half weeks.

Almost all the population growth is happening in Africa and Asia, but not in mainland China where Mao's one child policy abruptly stopped it. Here are the ranges of forecasts taken from a variety of sources. The most optimistic calls for a peak in population about thirty years from now but the chart shows there is no guarantee that growth will stop there. Courtesy of Wikimedia: 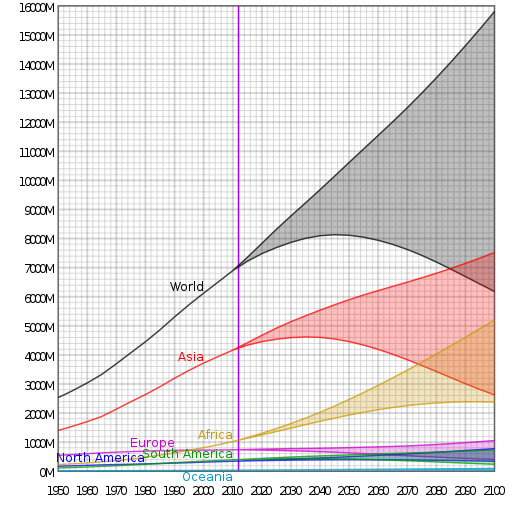 African and non-Chinese Asian countries are also growing fast economically, but from a low base level. They will be the source of much of the world's GNP growth for the next decades and although their populations will not yet be rich for many years to come they will all eat food in the meantime.

This is what is leading to the growth in food consumption that is currently neck-and-neck with crop production increases caused by extra carbon dioxide in the atmosphere, better cultivation and extra acreage (in that order). These two large and fast-increasing numbers have different characteristics however, which will lead to some excitement in the years to come. Population grows smoothly, lacking wars and famine, both of which are largely absent. Crop production is at the mercy of weather, disease, other pests and interruptions and so grows more erratically.

Production is also measured constantly and the results are reported widely but little attention is paid to the constant growth of demand from more and more mouths to be fed. Any crop report that shows more production from even higher yields or increased planted acreage is probably an opportunity to buy, as the corresponding increase in consumption gets much less attention.

The risk of a failed harvest has also increased sharply in recent times because of the prevalence of single species monoculture in search of higher yields, as recently highlighted by the Queens University of Belfast Institute for Global Food Security. Some shortfall in a main food crop (or several at once) would lead to a sharp increase in prices, so there will be major bull moves ahead on any such disruption, whether real or imagined.

There have been big changes elsewhere that have produced a result that is a useful illustration of the modern world and its impact on agriculture. Economic growth in China has been spectacular, even as the population has remained steady. Two decades of 7% annual GDP growth (or higher) have increased the size of China's economy so much that another increase of 7% now produces $1.5 trillion of extra activity in a single year, which is half the size of the economy of France or the UK. These are the fifth and sixth largest economies in the world, so this extra output (thanks to the magic of compounding) is already truly staggering and will increase yet more. As is widely known, this growing affluence has created Chinese appetite for a much richer diet, containing more meat. Raising livestock is costly and several kilos of feed are needed to produce one kilo of beef. Soybean meal is a popular cattle feed and so demand for it has shot up. Meal is made by pressing soybeans into meal and oil and there was historically a balance between the two products, as both are useful foods.

The price of soya meal used to average about $175 per tonne and is now often above $400. The price of soya oil has also risen, but by much less because it is the meal that is most in demand - it is almost as though the oil is a by-product now instead of being equally valued. This appears to be a permanent shift that is still moving as this chart, showing the two prices and the difference between them illustrates:

This is just one example from many that we watch for in the shifting economic sphere as demographic changes work their way through the world. We would welcome readers' thoughts.